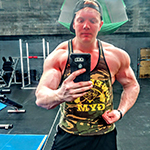 Just a dood who is born to game.

Caleb started his journey of professional gaming career with various games in 2011. He is one of the famous speed runners of Twitch. Caleb Hart works hard to establish himself as a professional gamer and got many Games DoneQuickevents as a commentator and speed runner with his excellency. He left his coffeeshop job to get into streaming. When he started to stream, he had to struggle to get into professional streaming. But his dedication brought him success. People started to notice him from 2013. His transition from coffeeshop job holder to professional streamer can encourage new streamers.

Caleb Hart doesn’t share much private information on social platforms. He makes videos of bodybuilding and gym workouts along with streaming videos on YouTube and he loves to cook and feed people as well. He has a brother. Moreover, he also has two cats. He enjoys bodybuilding and gym workouts. There is no controversy about his personal life. But according to some sources, he was banned from Twitch for a racist comment. Later, he apologized for the inconvenient episode.

He began with streaming in 2009. Although, he used to watch other streaming videos on YouTube. Those videos inspired him to create his own YouTube channel. He signed up for a YouTube channel with his gaming content in February of 2013. CalebHart42 streamed with ‘SuperMetroidgalaxy’. He used to play Final Fantasy VII, the Mega Man X series. Sometimes, he played Harry Potter and the Chamber of Secrets. Nowadays, he is streaming with Demon’s Souls, Final Fantasy VII, and Vikings: War of Clans, etc.

Caleb got 3,550 subscribers on Twitch. He is partnered with Twitch. Moreover, he earns $8875 USD from his subscribers. The tiered subscriptions, team salary, sponsorships and tips added to his monthly income. He streams 8,237 hours with 1,660 average viewers and 14,802 peak viewers weekly.

He gained several numbers of speed-running world records with Mega man X in 2013 and Final Fantasy VII in 2018.

“It doesn’t really matter what you play. You want to seem like you’re professional. You want to seem like you know what you’re doing because when people see that, they’re really going to latch on to that… I mainly do speed-tuns because that’s what I like doing… Just have a good time, because what a lot of people do – and this is a very, very bad approach – is that they come in thinking about money… That’s not what you want to do when you first start streaming unless of course, you’re already famous… because you’re not going to get viewers that way, and your motivation for streaming is going to decrease because you’re not thinking about having fun, you’re thinking about, ‘I want to make as much money as possible, that way I don’t have to work.”