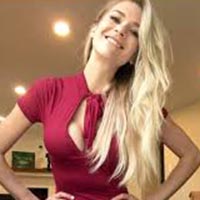 I'm Lea - I love gaming and food, I talk too much, am usually confused, and am running on way too little sleep.

LegendaryLea started her streaming career on 22 October 2012. However, she explored a variety of games. Though legendary lea is well known for streaming Hearthstone, she started her career playing World of Warcraft on Twitch.

LegendaryLea chose streaming over her academic career. Basically, her YouTube channel is full of her live streams. Moreover, she had collaborated with her fellow streamer Sodapoppin for a while. Her YouTube channel Lea May has 152K subscribers with 19,755,775 views and 367 videos as of 2 January 2021. LegendaryLea is one of the top 15 female Twitch streamers.

Moreover, Lea loves pets and she has a poodle and Chihuahua mix dog named Rigby. She had a long term relationship with Sodapoppin. Moreover, Lea has some controversies like the Twitch ban and disrespecting her ex-boyfriend Sodapoppin.

Lea May shared her medication history regarding anxiety and mental health. Thus, she was suffering from severe anxiety problems. Lea loves to travel and practice Yoga. Moreover, she is an enthusiastic person in her life.

Legendary Lea involved herself in gaming with the help of her elder brothers. Although, she chose the controller at the age of five and loves to play Super Maria and Chrono Trigger. Her first love game was Everquest. After some years, LegendaryLea started to play Super Nintendo with her brothers.

Legendary Lea plays Hearthstone for a pretty long time. Lea began with streaming with World of Warcraft. Then, she also streamed Grand Theft Auto 5, H1Z1, The Last of Us, Red Dead Redemption 2, Overwatch, Fortnite and Counter-Strike: Global Offensive, etc. Lea competed in the H1Z1 Invitational at Twitchcon in the year 2015.  Her followers and subscribers love to watch her game reviews and social commentary as well.

LegendaryLea has more than 1200 subscribers on Twitch. Thus, she streams for 2,669 hours live in total. According to Twitchtracker, Lea has 569 average viewers and 966 peak viewers in three months of statistics count.

The estimated net worth of Legendary Lea is $1-$5 million USD per year. However, Lea earns around $278 756 USD excluding subscriptions, tips, brand collaborations, etc. Her major income comes from the brand sponsorships and Twitch Affiliate Revenue.