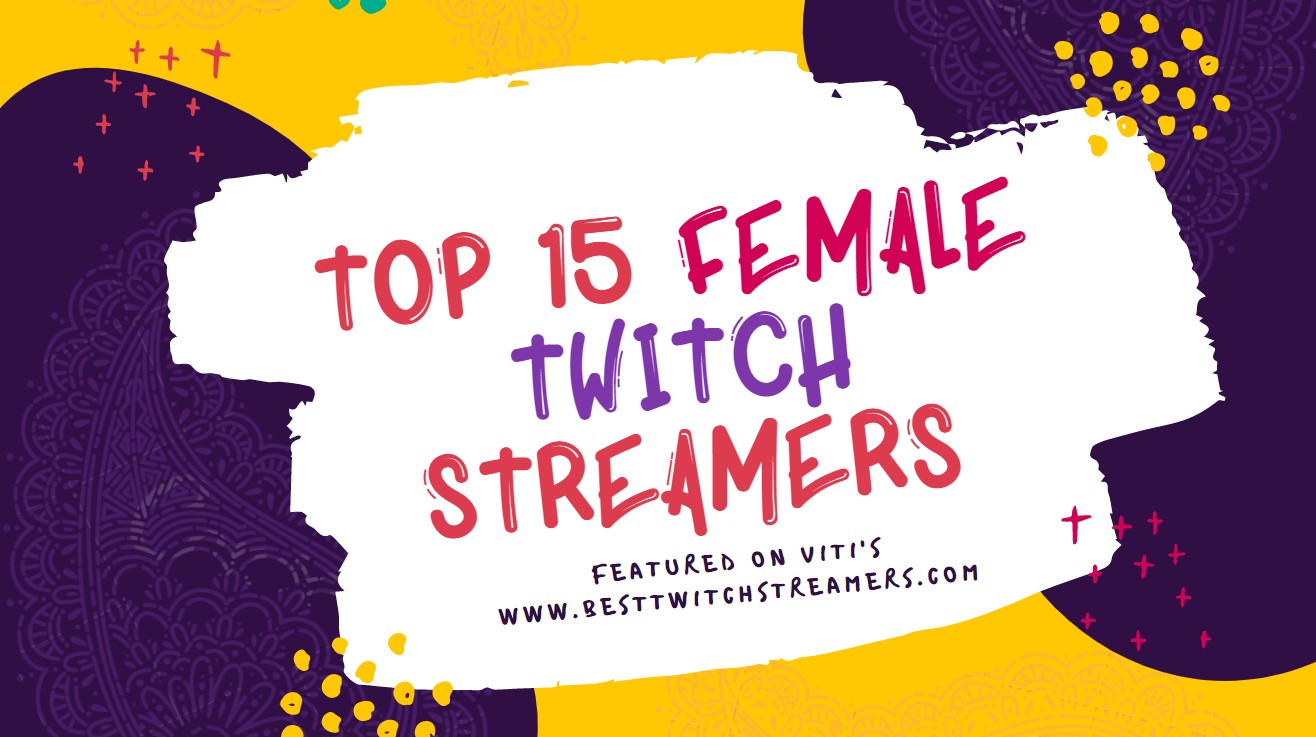 Twitch is the biggest platform to prove the gaming expertise to the world for the male and Female Twitch Streamers.

Gaming can be way of earning money. Twitch helps the gamers to expand their gaming career and gain more fame all over the world. It gives them the opportunity to showcase their talent and gaming knowledge. Once the gaming community was male centered.

Nowadays many women come forward to create their identity on the gaming community. Woman are passionate about gaming and streaming. They are famous in YouTube too. The female streamers are exploring the games and also uploads various creative contents to entertain the followers. Twitch has 35 percent of female streamers. Here we will talk about top 15 female Twitch Streamers. Let’s begin.

She is a well-known female Twitch streamer. Her real name is Kaitlyn Siragusa. She is also a live streamer, cosplayer and model as well. Kaitlyn started to design costumes from her high school life. The Houston Grand Opera and Houston Ballet found her after people praised her for costume design. Then, she started her character company. Some local news stations featured her character company. She attracted people by showcasing her costume in several comic conventions. Her estimated net worth is $7 million. Although, she has 1.8 million followers on Twitch. She streams ASMR (autonomous sensory meridian response) for many years. Recently Amournath started to stream Animal Crossing.

Her real name is Kathleen Belsten. She chose all games she can play really well. However, Kathleen is one of the popular Australian Twitch streamers. She basically plays Overwatch, Witcher 3, and Just Dance. The estimated net worth of Loserfruit is $1.1 million. Although, she has numerous vlog contents. Loserfruit has 2.1M followers on Twitch. She gained an excellent follower base with her sense of humor and spontaneous characteristics.

She began her career with playing Hearthstone. Then. LegendaryLea also plays World of Warcraft and Overwatch. She is famous for shake up things with playing Sims 4. Usually, she engaged the followers with her holistic behavior. Her real name is Lea May Currier. LegendaryLea has almost 638k Twitch followers. Moreover, her estimated net worth is $500,000. Lea loves to share her daily life activities on her Instagram.

She is considered as one of the talented Twitch streamers. Moreover, she is famous for streaming twice in a day. Her real name is Kristen Valnicek. She is a vlogger and uploads her travel, cooking, lifestyle, and racing supercars experience. Kittyplays loves to interact with her followers while streaming. She streams famous games like Fortnite, Counter-Strike: Global Offensive, and PUBG. KittyPlays has 1.1 million followers on Twitch. Although, her net worth is $300,000.

She broadcasts League of Legends on her YouTube and Twitch channel. Her gaming name is inspired by her real name Lily Ki. She also guides her followers about streaming. Moreover, she is also a good musician. LilyPichu shares videos of Korean and Japanese culture. She is focused on streaming and gaming. Although, she posts her favorite anime playlists on Twitch. She is a close friend of Jacky, the Dota 2 Streamer. The estimated net worth of LilyPichu is $800 thousand. She has 1.7 million followers on Twitch and 2.59 followers on YouTube.

She is popular for her various streams on Twitch. Kaceytron often streams World of Warcraft, Overwatch, Counter-Strike: Global Offensive, Grand Theft Auto V and League of Legends. But she is known as a League of Legends player. She engaged her followers and subscribers with her unapologetic and bravery characteristics and excellent sense of humor. However, she is one of richest streamers of Twitch. Her estimated net worth $200,000. Kaceytron has 543k followers on twitch.

Her real name is Rumay Wang. According to the top list of world’s players, she is one of them. Rumay began with her career with playing Hearthstone. ItsHAFU played World of Warcraft. She won many best titles while playing World of Warcraft. She streams for 60-80 hours weekly. Although she started to play Among Us recently. She is playing games from the age of 14. Rumay is passionate about games. However, her estimated net worth is $108 million. She has 1.1m followers on Twitch.

She is a 23 years old Twitch streamer. Her real name Imane Anys. Pokimane started her streaming career in 2012. With the passing time, she got popular same as Ninja and Myth. She mostly plays Fortnite and League of Legends. Imane owns two YouTube channels. She is also famous in YouTube community. Moreover, she is great at video production and gaming. One of her accomplishment is she got the nomination of the Content Creator of the Year award in the year of 2018. Her estimated net worth is $1-2 million.

Alexia Raye is an intelligent social media star. She is graduated in biochemistry and then got the social media fame. Basically, she was famous on now-defunct Vine. Then, she got to know about Twitch and YouTube. Alexiaraye is a part of the well-known ‘GLAMSS’ group. Alexiaraye shares her lifestyle and gaming videos on Twitch and YouTube. She has approximately 381k followers on Twitch and 121k subscribers on YouTube.  Usually She plays Among Us, Fortnite and other games. She is also a renowned model of United States.

Chelsea Sandy aka xMinks graduated in Pharmacy. She is an Australian Twitch streamer. Chelsea chose streaming over her dispensary technician job. Although she is famous for Fortnite. xMinks is also played H1Z1 and Call of Duty as well. She has excellent gaming knowledge, especially in Call of Duty. Moreover, xMinks is one of the top female Twitch streamers of Australia. She has 359k followers on Twitch.

She is a creative gamer of Twitch community. Her real name is Nicole Echoles. She entered to the gaming world at a young age. Nicole engages her audience with humor, good looks and gaming knowledge. Usually she streams for various games as Fortnite, Super Mario, God of War and Until Dawn. She also shares fancy dance videos, portrayal of casual faces to entertain her viewers. KneeColeslaw has 386k followers on Twitch. She is good at commenting candid and catch attention of her followers.

Sonja Reid owned the Twitch channel named OMGitsfirefoxx. She is a great Twitch streamer who streams various games as Counter Strike: Global Offensive, Minecraft and Overwatch. She is fond of chatting with her followers on live. OMGitsfirefoxx also shares her real-life fun moments with her followers. She is also famous for posting creative contents on Perler beads. Her Twitch channel has 751k followers.

She is a Korean gamer and Twitch streamer. Becca Tilts completed her graduation on Sociology from Boston College. She often streams for different games. But she is well known for playing League of Legends. Sometimes, she spent her time chatting with her followers and viewers. Becca plays with animation mode on her streams. She cares for her millions of viewers. Becca is a dedicated gamer and streamer as well. She has 368k followers on Twitch. Her estimated net worth is almost $1 million.

Tory is a one of the top female Twitch followers. Usually, she streams games as PUBG and Counter Strike: Global Offensive. Tory also shares her personal lifestyle videos on social media and Twitch. She began with streaming League of Legends.DingleDerper has 443K followers on Twitch. She posts funny dance and silly cosplay videos to amuse her followers and viewers. DingleDerper comes up with various contents with her spontaneous characteristics.

Brandi is a talented gamer on the Twitch community. She is playing Counter Strike: Global Offensive. DizzyKitten shares her energetic and outgoing characteristics to her followers. She entertains her followers with occasional cosplay. Brandi often attend Q&A sessions with her fans and subscribers. She also arranges giveaways for her fans and viewers. DizzyKitten has almost 634K followers.

Twitch is helping the gamers to promote themselves and also earning money for a living. People never imagine gaming can be a profession. But Twitch makes it possible. It is a dream for every passionate gamer to earn money for playing games.

Twitch girls are also contributing to the Twitch community as the male streamers. They are getting famous on Twitch and YouTube as well. Female streamers are also getting several chances to showcase their gaming skill and expertise.

If you love to watch streaming, you can also join the Twitch community to follow all the 15 top female streamers.