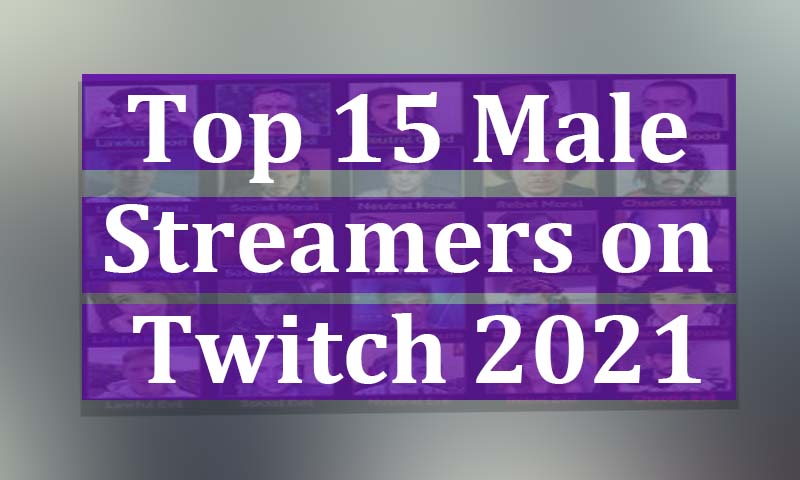 Twitch is a wonderful opportunity for gamers. Here, you can earn money as twitch streamers by playing your favorite games. There are more than 15 million viewers per day and 140 million new visitors monthly on Twitch. Choosing a streaming career is a great idea for gamers. Twitch is the platform where you can be connected with your subscribers and followers. You can also enjoy streaming videos of other professional gamers as well. Let’s know about the Top 15 male twitch streamers.

Shroud has 8.5M followers. He is one of the top male twitch streamers on Twitch. Moreover, he is famous for playing Call of Duty Black Ops4. His real name is Michael Grzesiek.

Thus, he is the top tier professional Counter Strike players on Cloud9. He has the second top follower base. Although he entertains his viewers and engage them with his game tactics. He plays Counter Strike, Fortnite, H1Z1, PUBG frequently. He streams with 25,000 viewers. He streams for almost 50 hours weekly. Moreover, his estimated net worth is $6 million. He began with a membership of teams like Slow Motion,Manajuma,Exertus etc. Later he got into Cloud9. His streaming videos are available on his YouTube Channel

Ninja became famous for playing Fortnite. People noticed him for his professionalism and excellent game performances. He also plays Battlefield and Realm Royale. Although, he streams for 80 hours live in a week. He is one of top Twitch streamers all over the world. Moreover, he has 16.3 followers on Twitch. His real name is Tyler Blevins. He started his gaming journey playing Halo.

He also placed fifth and eighth in the Halo World Championship with his team Renegades for playing Halo 5 in 2016. He is focusing on Fortnite nowadays. Sometimes, he plays League of Legends. He gained a loyal fanbase and subscribers on Twitch. His estimated net worth is $10 million.

His real name is Jaryd Lazar. He is a full-time professional Twitch streamer. He streams for 70 hours weekly.  He posts videos of various games like Fortnite, Ring of Elysium, Call of Duty: Black Ops 4. He has 5.7M followers as of November 2020. He is partnered with many renowned brands like Audio-Technica and Monster Energy. He engaged his followers and subscribers with live chats and activities. Although he is one of the top watched streamers on Twitch. He is a former Counter Strike player in his team Mythic. He loves to play shooter games. Moreover, he was the most followed streamer on Twitch in 25 January of 2018. His monthly net worth is $20,000.

He started to play League of Legends from his teenage. He ranked Challenger 3 in season 3 at North America and Challenger 6 in season 4 at Europe and North America. He continued his challenger status in 5-7 seasons. His subscribers and viewers are impressed with his gameplay montages, highlights and spectates on his YouTube channel. He makes some informative in-depth guidance and patch note review videos. He shares discussion videos on theories, advices, tips and fun time of streaming on his Twitch streaming. His estimated net worth is $6.5 million. He has 2.8M followers.

His real name is Michael Santana, lives in Florida of United States. He began his gaming career playing League of Legends. He managed Challenger 1 at North America. He is a former member of Dignitas team. He played with the team till 2014. Michael streams for 9 hours live in 6 days of the week. He comes up with Scarra to host a weekly segment named Beyond the Rift. He talked about top news, game predictions and issues regarding League of Legends of all over the world. He achieved the championship of flippers360 LAN tournament recently. Although, he guides the new streamers as well. He has 2.7M followers on Twitch. His net worth is over 8 million.

He started his streaming career in 2011 after the release of DayZ. He also plays Arma 3, Fortnite, H1Za, PUBG in Twitch. He is known as a PC gamer and Twitch streamer on public platforms. He treasures his privacy. Although, he comes up with his real name infrequently. His real name is Saqib Zahid. He took a short time break for a while. After the break, he started to stream on Twitch in his scheduled time.

He is streaming from his teenage period. Although, he started to stream at the age of 17. He was streaming for a website named Xfire in his early days. Later, he got to know about Twitch. He joined Twitch about 6 years ago. He used to play various games until he found World of Warcraft. He is the biggest fan of World of Warcraft. His real name is Thomas Morris. He was a professional World of Warcraft players earlier. Moreover, he loves to talk about the game. He is a part time owner of a gaming team called NRG eSports. His net worth is $8 million. He has 2.9M followers.

His real name is Tyler Steinkamp. He is famous for his League of Legends broadcasts. Moreover, he is a full-time professional Twitch streamer. He streams for 40 hours weekly. He also plays other games as well. Thus, he has a YouTube channel with over one million subscribers. However, he gains and sells his merch to the followers in his self-titled website. He enjoys playing League of Legends over other games on Twitch. He got almost 3.9M followers as of November 2020.He has an estimated net worth of $4.3 million.

He chose his streaming career over his full-time job. He played various kind of games like Overwatch, World of Warcraft, Call of Duty and others. Furthermore, he is popular because of his friendly and calm behavior. He engaged the viewers with nice gesture. His real name is Timothy John Betar. His wife appears with him in the streams sometimes. According to him, he is living out of dream. He named his supporter the #tatmanarmy. His friendly approach connects him more to his followers. Moreover, his followers contribute $5 to subscribe his channel. It supports his stream as well. He started his streaming journey in 2015. He got 5.8 million followers over the years. His estimated net worth is $1 million.

The real name of JoshOG is Josh Beaver. He is living in North Carolina. However, he dropped his college to be a professional streamer. He played Counter-Strike as a beginner. Then, he started to play Assassin’s Creed, Call of Duty, Far Cry 5, Fortnite and other games. He earns $25,000 monthly with over 5000 to 13,000 active viewership per stream.Moreover, he has 10,000 subscribers with 1.7 million followers and 70 million viewers monthly. He started his streaming career in 2014. He has estimated net worth of $2 million.

He is a professional Twitch streamer. He usually streams for 50 hours in a week. However, he has a huge viewer and followers base on Twitch. He also has a YouTube channel with 1.6 million subscribers. Thus, he loves to make streaming videos and uploads them on his YouTube channel. People loves him for playing PUBG and Fortnite. His real name is Brett Hoffman. He has 4.7 million followers on Twitch. He began his streaming career in 2012. He is collaborated with some brands like G FUEL and Logitech. Moreover, he sells clothing with his logo to his followers and others as well. His net worth is $2.5 million.

The real name of Tfue is Turner Tenney. He is one of the professional gamers of the community. Although, he got the fourth highest follower count on Twitch. His channel is the second most watched Fortnite channel. He streams for 70 hours live per week. Furthermore, he mostly plays Fortnite on Twitch. He also plays PUBG, Call of Duty and Destiny on Twitch. He has excellent gaming skills to engage his viewers. He has 9.6 million followers on Twitch. His huge follower base supports him to expand his career to another level. He is a popular face of gaming community. He is collaborated with a company named MAXNOMIC. They provide the best specialized gaming chairs.

He has the third highest follower base on Twitch. He was a content creator in 2013. After creating an excellent fanbase, he decided to be a streamer. Thus, he started his gaming career with playing the Fortnite Battle Royal in 2016. He also streamed with games like Paragon and Miscreated. But he Is famous for his Fortnite game performances. He is partnered with brands like HTC, Geico, Logitech and others. His real name is Ali Kabbani. He has an estimated net worth of $3.5 million.  He has 6.9 million followers on Twitch. Kabbani plays with a team called Team SoloMid as their streamer.

He started his gaming journey on Twitch community in 2011.However, he is one of the oldest streamers of Twitch. He achieved millions of followers on Twitch. He was a part of best 100 subscribers on YouTube. His real name is Tom Cassel. The name of his YouTube channel is TheSyndicateProject. He played Call of Duty at the beginning. Moreover, he was a host of different podcasts and talk shows. Later, he played Minecraft, Tom Clancy and other games. Moreover, he did the voice over of Loki in the mobile app games of Marvel Avengers Academy. He has a net worth of over $5 million including his advertisement revenues, sponsorships and extra gigs. He owns a clothing brand named SYNDICATE ORIGINAL on his Twitch account.

His real name is Marcus Hill. So, Marcus is a former professional league player. He competed in world championship. Thus,he was the best laner of Delta Fox. He was retired from the professional tournaments in 2015.Moreover, he is still a part of the team called Team SoloMid as a streamer. He is known as Dyrus in Twitch and other public gaming platforms. He is an aged Twitch streamer. However, he is famous for his regular live streams on Twitch. He has 1.5 million followers. His estimated net worth is $1 million.

Keep learning about Twitch. Be ready to begin.